The 16th of September is personally significant to me in many ways. Aside from celebrating Malaysia Day, it also marks my father’s birthday. Every year, on his birthday, we as a family would dine out as a simple way to celebrate. However, this year was an exception. This year, I would be spending Malaysia Day away from my loved ones and far from my homeland.

I have been volunteering with Greenpeace for over a year now. So, when a few days before Merdeka, I was presented with a volunteering opportunity to travel to Ketapang, Indonesia with the Tim Cegah Api (TCA), otherwise known as the Greenpeace Forest Fire Protection Team, to see them them in action. The team is composed of 11 brave individuals, many of whom come from fire impacted communities. They all started out as strangers brought together with a desire to stop forests fires from happening ever again.  I instantly jumped at the opportunity to join them knowing I would be doing something patriotic, as well as help shed light on an issue that hits close to home. I would be going on an environmental mission to tell the story from a Malaysian’s perspective on the haze that’s been haunting Malaysia, Indonesia and Singapore for years and years. I was also eager to get to know our Indonesian neighbours and tell their story of hope amidst the destruction.

Haze coming from Indonesia’s forest fires have had an impact on Malaysian society. Who can forget the toxic hazy days of 2015 and 2016? It was so bad, it made the sun disappear and polluted the air, making people sick or scared to go outdoors. Who would want a repeat of that? So, I made a decision to go on this “bearing-witness” trip knowing that I would not only would I miss my father’s birthday, I would also miss my sister’s wedding reception on her husband’s side.

I’ve never considered myself a patriotic person but of course, I’d stop and stand whenever I’d hear the Negaraku being played (while saying the words under my breath). I’d put up our Malaysian flag on my car once a year.  But on this special occasion, I felt proud, doing something for my country and for my family. On the 16th of September, I woke up at 3am and took a cab to Soekarno Hatta International Airport Terminal 3- the newly opened terminal. Using the airport wifi, I messaged my dad and wished him a Happy Birthday. I even posted a lengthy post on Facebook for him (something I don’t usually do). It was a long trip. The flight to Pontianak took less than 2 hours, and from there I waited about an hour for my connecting flight to Ketapang, a small town in West Kalimantan where the peat landscape is now under threat due to palm oil expansions.

Upon landing, I observed a few things. I saw a helicopter being loaded for a water bombing activity, to put out fires from above. It made me wonder how many trips the helicopter had to make just to stop forest fires from speading, and I was told that there were only two helicopters servicing the whole of Ketapang. Could you just imagine how busy things were two years ago, at the height of the forest fires? The next day, I followed the TCA to a ‘mopping up’ activity- to ensure that the fire they put out two days prior was totally extinguished. This is important as fires in peatlands tend to be underground, where you can’t always see them. They brought equipment such as thermometers to measure the temperature of peatlands underground. We drove for a couple of hours to get to the spot, near Sungai Sirih. There, I saw the blackened fields of what used to be plantations and came to realize the destructive power of fire. And that was only a little of what these people in Ketapang had gone through in 2015, when much of the area was engulfed in fires. Visibility was so bad that there were 19 reported deaths and more than 500,000 people suffering from respiratory problems as a direct cause of haze. It made me think about how we were still sort of fortunate in Malaysia, that we only felt the after-effects.

Many Malaysians might feel like haze is just a nuisance that would, on occasion, give us a school holiday when the city’s air pollution index (API) levels would reach the 200th levels, deemed unhealthy. But for the TCA folks and their communities, the fires were a serious cause for alarm. It was silently seeping into their homes, schools, and offices, robbing people of their right to clean air and a safe and healthy environment. Yet these courageous Indonesians pushed on and refused to be victims of circumstance. This small team of firefighters have taken it upon themselves to stop the forest fires with their own hands. By doing so, they prevent the haze from happening and for that, I salute and thank them. I will be writing about them more in another blog, so stay tuned for that. So, in the spirit of Malaysia Day and our Asian culture of lending a helping hand to our neighbours when they’re in trouble, I call upon my fellow Malaysians to support the efforts of courageous groups like Tim Cegah Api. I would also encourage netizens to speak out on social media and remind palm oil companies— especially those that do business in Indonesia— to respect the environment and the people by committing to protect forests and peatlands. These companies should also rehabilitate the lands they’ve destroyed. It’s the least they could do. People can go further by putting their names on Greenpeace petitions and join the hundreds of thousands worldwide who demand for sustainable palm oil products. I don’t regret my decision to leave my family and the homeland for a few days. The trip to Ketapang was an eye-opening experience that has taught me so much. By writing a series of blogs on the forest fires, I’m hoping to raise open more awareness among Malaysians on what is happening in Indonesia and how it affects each and everyone of us on a deeper level. My hope is for all of us citizens of earth to band together and find solutions to the yearly haze problem that threatens our common forests, endangering both people and animals that all call it home. 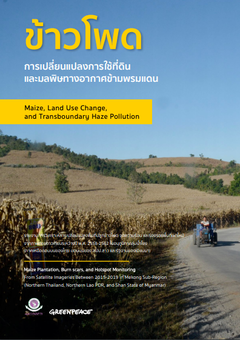 Both the PM2.5 and transboundary haze pollution are directly related to the growth of monoculture agriculture in Thailand and in the neighboring countries. There is evidence that maize pricing varies…