Working in climate and environment, you hear this question a lot. On one hand, environmental groups — including Greenpeace — will tell you that every action you take can make a difference. Every action counts! On the other, editorials and experts will tell you that it doesn’t matter what you do in your everyday life, because the problem can’t be solved by individual action. They may claim that its  a cop out and lets corporations off the hook, because the problem lies with the broken but deeply entrenched system we’re caught in. After all, 70% of emissions are created by 100 companies, right? Marinel Ubaldo, Supertyphoon Haiyan Survivor, climate and human rights petitioner, left, and Tina Cocadiz, a Filipino-American based in New York who experienced Hurricane Sandy, right, stand in front of the ‘Wall Street Bull’ to represent communities standing up to the world’s biggest oil, gas, and cement companies most responsible for the climate crisis.

As this Vox piece laid out so well, as a climate campaigner, my friends also used to proudly tell me how much they recycle, or about their efforts to eat less meat or buy green products whenever they could afford them. It always broke my heart to tell them: sure… but to have a real impact you need to refuse and reduce first, join a climate strike, or become a politically active citizen who demands that the mayor in your city launches an ambitious mobility plan or your government starts holding corporations accountable.

After one of my lectures, which were typically technical and lengthy, their facial expressions had usually changed dramatically. Their body language said it all; and then, silence. Or worse — the defensive response: I do what I can. You know? Or the powerless version: Even if I do that, others probably don’t, so what difference does it make? Or the most defeated and most painful one to hear: Well, who cares? We are all screwed anyway, right?

I wanted my friends and family to keep speaking to me, so I started to explore new ways to have conversations with them about climate change and the environmental crisis while being mindful with their emotions (and mine!). Because, the truth is, we need both individual and collective action. And we need them now!

Yes, some have argued that small positive changes in our lifestyles can be a distraction, and even hold back the drive for and uptake of ambitious policies, as we deprioritise a collective check on corporate and political power. But I believe it isn’t a matter of either, or. It’s both — AND. Individual and collective actions go hand-in-hand. They are intimately interlinked.

Recycle. Yes, and refuse, reduce and ask big brands to change their business and distribution models.  Bike to work. Yes, and work with your neighbours to get your mayor to declare climate emergency and create a plan to increase bike lines and public transport in your city. Change your light bulbs. Yes, and advocate with your community for the uptake of renewable energy to transform the energy system in your region. Eat less meat. Yes, and work with your kids’ school to include vegetarian meals in their menus or introduce how to grow their own food in their curriculums. Plant trees. Yes, and demand your government to protect our forests and adopt bold climate policies. Greenpeace volunteers distribute seed trees to people on the street as to celebrate International Day of Forests in Jakarta.

It’s true that to tackle the ecological and climate crisis straight on, systemic change is a must; a matter of survival.

We do need to shift societal mindsets from ‘only the free market and extractive models can spark happiness by creating economic growth’ and ‘having more stuff makes me happy,’ to ‘the economy must work within the environmental limits of the planet’ and ‘self-worth is linked to our relationships and experiences, not buying more stuff.’

We do need collective action to drive the system change we want to see.

But we can push those shifts forward by encouraging positive stories, co-creating solutions that shape the new normal, and working towards an environment with role models and reward systems that mirror these behaviours as socially desirable.

For this systemic change to happen, we need society to acknowledge the magnitude of these shifts and we need to start somewhere. And that somewhere can start with each of us.

No, individual actions won’t have an immediate impact on world problems. Using a tote bag or buying fruit that isn’t repacked in foam isn’t going to stop the production of single-use plastic at the scale required. But it could make a difference to your local city or community as a first step, because personal positive actions have the potential to empower people, build agency, encourage them to be a role model that inspires others and make them feel they are part of the solution.

Small signals can spark hope and search for others to build communities that take action. When the community takes action, it becomes more resilient, therefore more independent and sufficient.

Rosa Park or Greta Thunberg were and are both ordinary people who did and are still doing extraordinary things… and as a consequence, they changed (and still are changing) the world, creating a new normal that was unthinkable before they took that first brave step. 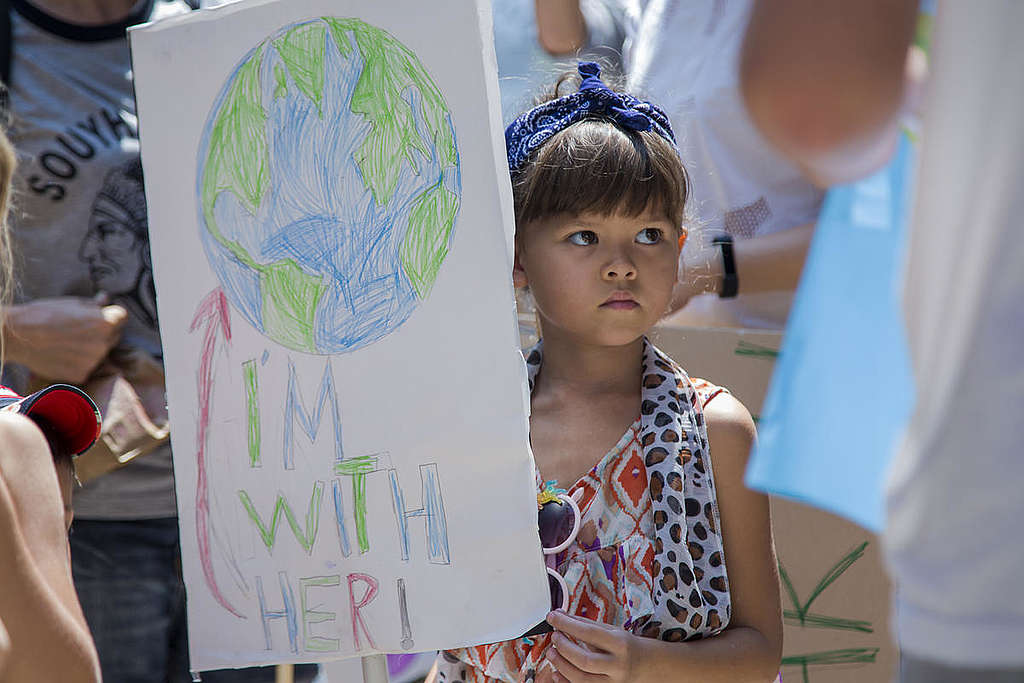 Students in Bangkok strike and demonstrate to support the School strike for climate movement, also known as Fridays for Future, Youth for Climate and Youth Strike 4 Climate. © Biel Calderon / Greenpeace

Not every single-handed action you take will result in a civil rights movement or stop an oil rig in its tracks. But it might change someone’s mind around a dinner table, or at a board table, or wherever it is you choose to take your courageous step. Courage means different things to different people, because it happens at the edge of our own personal comfort zone. Each individuals courage is different — but equally valid and equally bold.

Personal actions are a courageous and valuable starting point, let’s not shame people for doing what they can, or make people feel guilty for not doing enough.

Let’s be optimistic, courageous and honest with ourselves. Let’s acknowledge the urgent need to change our current socio economic system. And yes, that includes the way we think, behave and live, which means we need the small and the big actions, and anything and everything in-between. Air pollution from burning fossil fuels - primarily coal, oil, and gas - is attributed to an estimated 4.5 million deaths each year worldwide and estimated economic losses of US$2.9… For the first time, Greenpeace Southeast Asia and the Centre for Research on Energy and Clean Air (CREA) have quantified the global cost of air pollution from fossil fuels, finding… This report reveals the cost of air pollution from fossil fuels and highlights solutions that can protect our health and benefit our communities. Air pollution generated from burning fossil fuels…