Our coastlines are among the most impacted by plastic pollution in the world. Be part of the solutions! A TOES Tacloban member scours through the vegetation for plastic trash. Photo by Jettka Pariña.

Environmental organizations and local volunteers unite against plastic pollution in Tacloban for a series of activities dubbed as Brand Aud8. Led by Mother Earth Foundation, these are a series of clean-ups with a twist: the inclusion of a brand audit.

A brand audit is an evidence-based waste assessment that identifies the manufacturers or distributors of the plastic waste found in our environment. This month, the garbage of Tacloban City will be audited to identify which corporations contribute to the city’s worsening plastic pollution.

Along with brand audits, volunteers are conducting a series of clean-ups on September 7, 15 and 21. The first of these clean-ups was held in Magsaysay Boulevard and was led by TOES Tacloban, a local runners’ group. The boulevard, more popularly known as “Mags,” is a scenic spot in the city and was chosen by the host organization because they have observed that the area is always littered with so much garbage. This clean-up brought out issues that should be aggressively addressed to further clean the boulevard and manage the garbage in the area.

Aside from leading the first clean-up, TOES has been regularly conducting Basura Runs every first Saturday of the month.

“We noticed that the most common plastic waste in the area is disposable cups,” observed Mae Ann Anacion, a member of TOES Tacloban. Noticeably, liquor bottles are all over the place too.

Magsaysay Boulevard is a popular destination filled with food and liquor stalls. Because it is a popular but unregulated area, some of the patrons in Mags improperly dispose of their waste. These wastes end up in the ocean, as the boulevard is right beside the Cancabato Bay. Plastic pollution in the ocean cause water poisoning and death of living creatures due to microplastics. Aside from plastics in the bay, broken glass liquor bottles were also found and it is hazardous to people strolling in the area. 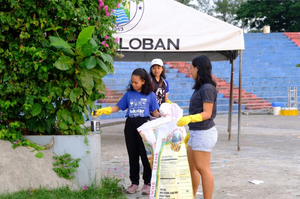 For two hours, 59 volunteers scoured the area–the sewer, drainage, the bay, and the port—to clean as much garbage in Magsaysay as they can. Armed with rakes and bolos, volunteers scratched through the sand and found garbage buried underneath. More were buried in the soil and hiding under the vegetation. Single-use plastic packaging for snacks, such as crackers and candies, were retrieved. All in all, thirty sacks of garbage were retrieved in Magsaysay. For sure, there is still more. After the clean-ups, volunteering organizations will come together to audit the waste retrieved. Magsaysay Boulevard is the first of three areas, with Barangay 83-Paraiso and Barangay 88-Fishermen’s Village as the next two. More plastic is hidden in the vegetation in Magsaysay Boulevard. Photo by Jettka Pariña.

While the stalls are responsible for some of the trash in Magsaysay boulevard, some of them might have come from the other side of Cancabato Bay, or from other municipalities nearby. It can be difficult to precisely determine. When improperly disposed, garbage ends up in waterways and carried to the ocean. This means that a concerted effort from different communities needs to be done. The local government is addressing the issue

Trash management for the city is an issue that continues to plague the local government unit. Tacloban is producing 100-120 tons (over 90,000kgs) of mixed waste, according to the waste assessment characterization study of Mother Earth Foundation. In a press conference held on the same day as the first clean up, Tacloban City Councilor Aurora Aimee Grafil expressed the need to address the trash produced by concessionaires. An inter-local government unit coordination could be sought as an option to prevent garbage from leaking into the ocean.

In the coming weeks, Tacloban will enact an ordinance to ban single-use plastics and styrofoam. In the long run, the city aims to achieve zero-waste.

We need to acknowledge greater accountability

The community’s waste is only a part of the garbage problem. According to the organizations behind Brand Aud8, there are external and bigger contributors to the plastic pollution problem in the country. Out of 100+ countries, the Philippines was ranked third third-largest source of plastic that ends up in the ocean in 2015 (Ocean Conservancy Charity and the McKinsey Centre for Business and Environment).

To the organizing groups, the Brand Aud8 is a means to petition responsible corporations to provide alternative waste delivery systems that can reduce and eliminate the enormous amount of plastic waste they have distributed with the sales of their products. This means that, rather than the consumers, it should be the companies profiting from their sales that should bear the burden of responsibility for the pollution created by the plastic packaging of their products.

These Brand Aud8 activities are initiated by a community-based organization, Waste 360, in partnership with Mother Earth Foundation, the City Government of Tacloban, Greenpeace, and #BreakFreefromPlastic Movement, supported by local groups and associations, PAFMET, 5 Pieces Daily Habit and TOES Tacloban, and academic institutions including ACLC Tacloban and UPVTC NSTP.

Dennise Recuerdo is a Development Communication student at UP Open University. She works on programs, research, and communications for LEYTEAM. She advocates for ending plastic production and is helping the Brand Aud8 activities as a volunteer. A call on local government units to strengthen measures against single-use plastic to keep communities safe from the increasing waste harms amid the COVID pandemic. Air pollution doesn’t have to be an inescapable reality. The ECQ gave Filipino citizens a glimpse of what cities can be like with vastly improved air quality. It also showed…