As the world’s biggest soft drinks company, Coca-Cola bears a particular responsibility for the plastic crisis our oceans are facing. Valued at over $178 billion in 2015 and operating in over 200 countries, Coca-Cola has the means and influence across the sector to help end this flow of plastic pollution. 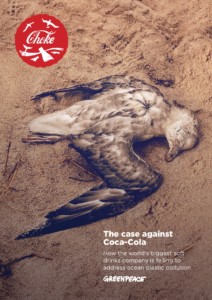 Yet despite claiming to care about ocean plastics, Coca-Cola is hiding the scale of its plastic footprint and failing to take meaningful action to stop its products from polluting our seas.

Greenpeace is calling on Coca-Cola to accept its responsibility for ocean plastic pollution and commit to rapidly phase out the use of throwaway plastic packaging.