June 5, 2018 (TORONTO) – New data collected through cleanups and brand audits confirms that some of the world’s largest corporations — including Coca-Cola, Unilever, Nestlé, and Procter & Gamble — are top contributors to single-use plastic pollution worldwide. With the G7 set to release a plastics charter on World Oceans Day this week, the Break Free From Plastic movement — representing more than 1,200 groups around the world — is demanding the world’s largest economies and companies do more to stem the tide of the throwaway plastic choking our oceans, waterways, and communities.

“World leaders and corporations must recognize that in order to address the scale of the plastic pollution crisis, we must ensure that we go beyond  recycling and address plastic pollution at the source. In Canada, only ten to twelve percent of plastics are recycled, so history has clearly shown us that recycling simply won’t cut it. Canada has a unique opportunity to use its G7 presidency to  lead by example and legislate a national ban on single-use plastics instead of pursuing false solutions, such as recycling, that will do nothing to reduce the amount of plastics that are being produced in the first place,” explains Greenpeace Canada plastics campaigner, Farrah Khan.

Break Free From Plastic member organisation GAIA (Global Alliance for Incinerator Alternatives) led cleanups and brand audits ahead of World Environment Day (June 5) to document branded plastic pollution at key cities throughout India, identifying PepsiCo India, Perfetti van Melle, and Hindustan Unilever as the worst multinational polluters.Greenpeace Africa led cleanups and brand audits throughout Senegal, South Africa, Kenya, Cameroon, and the Democratic Republic of the Congo on Earth Day, identifying Coca-Cola as the worst polluter.The results of brand audits conducted in five cities in the Philippines were released on June 1, with five of the ten most polluting companies also among the top polluters in a 2017 Freedom Island audit of ocean pollution. Those companies include Unilever, Nestlé, Procter & Gamble, Colgate-Palmolive, and PT Torabika Eka Semesta. Coca-Cola was also a top polluter in the new audit.

“The results of our recent brand audits have underscored the central role that companies play in the plastic pollution crisis,” said Froilan Grate, GAIA Asia Pacific Regional Coordinator and Executive Director of GAIA Philippines. “These companies cannot continue to churn out disposable packaging for their products and expect people to clean up their mess later. Corporations need to own up to this problem and stop drowning the planet in plastic.”

The global Break Free From Plastic movement is calling for G7 countries to pass binding reduction targets and bans on single-use plastics, invest in new product delivery models based on reuse, and hold polluting corporations accountable.

In recent months, McDonald’s, Starbucks, Procter & Gamble, Nestlé, Coca-Cola, PepsiCo and Unilever all published statements or plans addressing the plastic pollution crisis they contribute to, but none of the companies included significant actions to reduce their production of plastic.

People are taking action worldwide* to fill the void left by corporations. Recent examples in Canada include plastic attacks in Montreal, Québec and Val D’Or, The Last Straw campaign in students in Fredericton getting their school to not use straws or; high school students in Winnipeg trying to get bags banned.

It is time for governments to action point this void and make this zero waste charter mandatory.

Notes to editors: On June 7th, one day before the G7 Summit begins, Greenpeace Canada staff and volunteers will deliver a message to G7 leaders on tackling the plastic pollution crisis from Ottawa.

On June 9th, thousands of individuals will gather in Washington, DC, 60 locations across the United States, and in 23 countries to March for the Ocean. The march will focus on offshore oil drilling, ending plastic pollution, and protecting our coastlines.

For photos of actions against single-use plastics around the globe, click here.

For a wide photo and video collection of ocean plastic pollution, click here. 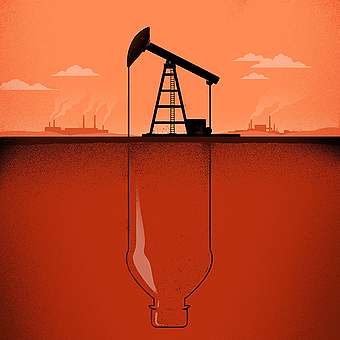 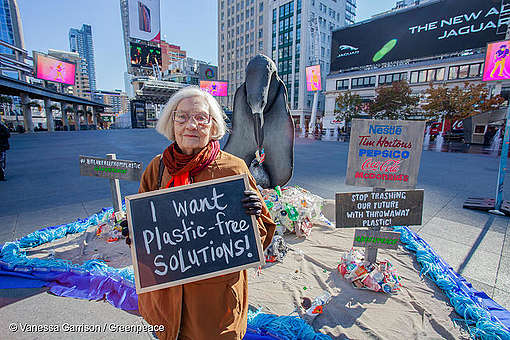 In Canada, this year was expected to be the year that signalled a shift towards an economy less dependent on single-use plastics. We were going to be told what plastics…

Big, transformative change can be hard to picture. Here are four extraordinary "regular" people living the values that should underpin the economic recovery, from installing solar panels, to delivering healthy…