27 April 2019, South Africa – Greenpeace Africa volunteers from across South Africa visited the head offices of each of South Africa’s top political parties to deliver a petition calling for a ban on single-use plastic.

The petition, started earlier this year, called for the African National Congress (ANC), Economic Freedom Fighters (EFF), Democratic Alliance (DA) and Inkatha Freedom Party (IFP) to prioritise a plastic ban in the parliament following this year’s election. To date, the petition has garnered close to 11,000 signatures.

Elaine Mills, the Cape Town-based volunteer who started the campaign on Greenpeace Africa’s open campaigning platform VUMA.EARTH, said in her address to the ruling party:

“The equivalent of one rubbish truck of plastic is going into our oceans every minute. By 2050, we will have more plastic in the ocean, by weight, than fish. South Africans use 8 billion packet carrier bags per year, which is totally unnecessary. I think we all know what the right thing is to do. What we need is those vested with power to legislate against single-use plastic.” 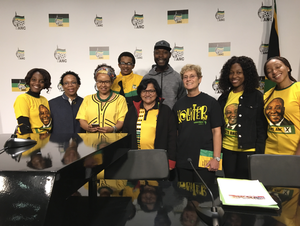 ANC Deputy Secretary General Jessie Duarte accepted the petition, saying that negating the harmful impact of plastic on the environment was a priority for the party.

“Plastics are like the new flowers, it’s very untidy and absolutely the wrong thing to have in our lives. We look forward to working with [Greenpeace Africa] quite closely on the way forward and finding a solution that will work for all of us,” Duarte said.

“The EFF has dedicated this year to health – and health is not only restricted to physical health but it is also go beyond that and include the health of the environment. I cannot make the commitment to include it in our manifesto, since I do not have those powers. However, the EFF is committed to a healthy environment and a healthy lifestyle.” 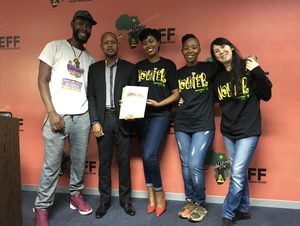 The IFP, who have already included a plastic ban in their election manifesto, reiterated their commitment to advancing calls for better environmental protection.

Their chief whip and environment spokesperson Narend Singh MP said: “I’d like to thank Greenpeace Africa for all the wonderful work they are doing to protect this environment. It is the only one that we have, and future generations must be able to enjoy it. But, what we see right now is real abuse of the environment… We as the IFP place a lot of emphasis on ensuring that we take these issues up in the parliament.”

The DA accepted the petition, but declined comment on the matter.

Visit www.vuma.earth to check out the campaign.

Please can we force the retailers and our government to stop the manufacture and use of plastic bags in South Africa. This is our only planet we have so let us all save it.

Our people have to realise that poor does not mean dirty. A littered environment does not allow for upliftment. It is about keeping it clean not making it clean. Furthermore, Africa is more and more reliant on tourism and tourists want clean and safe. Littering is a very serious "petty" crime but it has direct links to respect for the law, accountability and belief in the future: and the new phenomena of middle class Africans that litter indiscriminately. True transformation is needed here but it can have spectacular consequences. I know Africa can do it!

Stop Plastic!! It is Death to the Planet and to Us!!

You said you delivered petitions to three parties, the ANC, EFF and the DA. Why was there no picture reference to the DA handover?
The order in which they are listed also seems to indicate a political bias.
The listed order however presented should have been the ANC, DA and EFF, by whatever criterion was used, Alphabetically, Size or Time in office.
In a politically charged country such as South Africa, you do yourselves no favour in soliciting support, if you aren't sensitive to political inuendo.

Thank you so much for your message. We are always open to feedback and suggestions from our supporters.

One of our core values at Greenpeace Africa is our independence - we have no political affiliations whatsoever, and we are sorry to note that our choice in photographs has created an impression to the contrary.

The petition was handed over to the ANC, DA, EFF, and IFP. We selected these photographs because the volunteer who pioneered the petition was present in both, and we wanted to celebrate her achievement.

Again, we value feedback from our supporters, and we will keep this in mind going forward.